Half Moon Bay Brewery is up there for my favorite breweries to visit. It is hard to beat sitting outside on the patio on a sunny day with the dog and wife.  In fact, I have been out there 3 times in the last ten days…

Most recently, I had the Tunnel Vision IPA and Princeton-by-the-Sea IPA on draft, at the brewery.

I first had Tunnel Vision last year, and was very impressed by it. However, it was only a seasonal beer at that time, so it has not been around my last few visits. Now, it sounds as though they are going to keep this around on more of a full time basis, which is a good thing.

Aroma is of piney hops with some citrus. Fairly hop forward flavor, with some tropical fruits notes.

Only complaint is a slight aftertaste.

Overall, 83/100 (I was tempted to add a few bonus points just because I love drinking at the brewery so much, but held back).

Although this is their “regular” IPA, it is not as good as Tunnel Vision.

Light hoppy flavor.  This may well be why my rating is lower, as I tend to like the hoppier beers.  This one has little hop aroma and minimal hop flavor compared to the Tunnel Vision or most West Coast IPAs.  To me, it is almost more of a Pale Ale.

Now, here is the kicker.  This truly is one of my favorite places to go in Northern California.  Sitting on the bay with incredible views, and good food.  The artichoke hearts, fish tacos (get them grilled with the achiote rub), and the newly improved crab roll are all bomb. 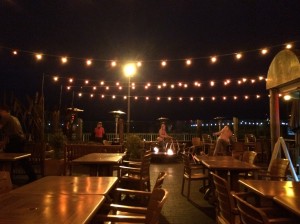 Or when before or after you eat you can be here?

The dog does not seem to mind heading over either…

So on top of writing reviews on the IPAs I drink, I also wanted to write about the places to drink them.  Naturally, my first such post is about the place we likely grab drinks most often, Steep Brew.

Steep Brew is one of my favorite places to go put back a few IPAs. Location is a factor as it is close to home, but the constantly rotating taps is another huge draw.

We tend to go to Steep Brew at least three times a month for drinks and a light dinner or apps. The taps rotate fairly frequently, and they oftentimes have “tap takeovers” where one brewery will be featured and have several, sometimes harder to find, brews on tap.

Every visit I make starts with a flight.  This is the flight I had for National IPA Day: 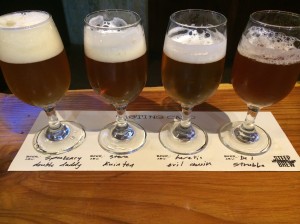 The flights are $10 ($9 during Happy Hour, which is all day Sunday and between 5 and 7 on weekdays) and a healthy pour for each of the 4 beers.  Typically, I am able to get 4 IPAs, and sometimes I can even get a second flight with 4 different IPAs.  The selection is usually pretty solid, and oftentimes I will find a beer from a brewery I have not had before.

Occasionally they will have a “tap takeover” where there will be several beers from one brewery.

They also typically have 2 beers on cask.

The staff is also great and tend to have solid beer knowledge and recommendations. One of the other great perks is that if you enjoy a beer, chances are you can run upstairs to Whole Foods and buy it to take home!

Food is also generally good.  Our favorite thing to get is the Southwestern Egg Rolls, and the truffle fried are hard to resist.  Alternatively, you can grab grub upstairs and eat at the bar.

For all these reasons Steep Brew is one of my favorite places to get a few IPAs.  The opportunity to taste something new is a huge draw, and it is easy to get to and has good food.  My wife tends to like the wine choices they have as well!

Where – Pedro’s Cantina (most recently, Lagunitas IPA must be the most popular IPA on tap nationwide by now, right?)

Lagunitas for me is like my Nike Free 5.0s. When I do not know what else to go with, go with the classic, easy and comfortable choice.

Lagunitas is the perfect IPA to have around the house at all times. Once we move out of the City and/or somehow figure out to get more room in the City this is likely what I will have on tap at home.  It is a smooth and not overly hoppy IPA, at least compared to most West Coast IPAs. That is evidenced by the approximately 45 IBUs, and although higher than non-IPAs, the ABV is on the low-side at 6.2%.

Color is a little lighter and golden than the bigger IPAs, with a bright, white head.

Hops mix well with light fruity flavor after some initial malty sweetness. Can be surprisingly refreshing for an IPA.

Overall, it is not going to knock your socks off but it is an excellent daily drinker. If you are having people over, you can guarantee a few people will enjoy it and even if they are not big IPA fans, they will put back a few.

Rating this one is difficult for me as the rating will not reflect its true value as an ideal “daily” beer. I had to rate it slightly lower as there is nothing “special” about it. 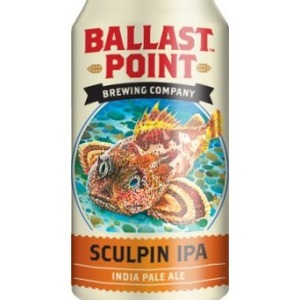 Probably my favorite IPA.  Sculpin comes in at 7% ABV with 70 IBUs.

Sculpin pours a rich golden color.  Has a hint of lemon on the nose.  Flavor is fruity with some grapefruit hoppiness.  It packs a mouthful, but in a good and almost refreshing way for an IPA.  Smooth. 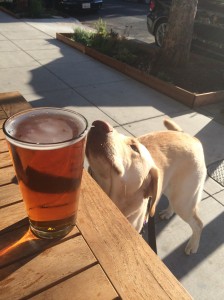 (pic from a more recent Sculpin indulgence at the Tradesmen in SF.  Sara approves).

The only problem with Scuplin IPA is unless you are buying it at a bar, it is exceedingly pricey.  At last check at Whole Foods, a 6er was $14.  I have found it to be $6-$7 on tap, or even bought cans at Gott’s in the SF Ferry Building for $5.

21st Amendment is a couple blocks away, so we make it there often.  One of the good and bad things about 21st is they have a fairly frequently changing beer lineup.  The good is that you get to try a bunch of different stuff.  The bad, once you find one you like it may be gone by the next visit.

Personality Crisis falls into the latter category.  It is a Double IPA with and ABV of 7.5%, with 75 IBUs.

For a Double IPA it was not as hoppy or alcoholic as most IIPAs. Fairly piney and citrusy.  Carbonation was moderate to light, which made for a smooth finish.  Felt more like a traditional west coast IPA (rather than IIPA) based on the subdued hops.

The bad news, it is apparently already gone, and not sure if or when it will be back.