We recently took a 12 day trip to Italy.  Looking back, we should have done longer, but the amount we accomplished in the time we were there was staggering.  Although finding craft brew in Italy was tough, it was not impossible.

Our visit included 3 nights in Venice, 3 nights in Florence, 2 nights in Cinque Terra, and 2 nights in Rome (travel time knocked off essentially 2 days).  We also had a 7 hour layover, which allowed some time to hop into London and get a brew.

In short, Rome had the best beer scene, Florence seemed to have a growing one, Cinque Terre had one good beer bar, and Venice was…tough. I will go through each city in the order we visited.

Rome was our last stop of beercation 2016. We had somewhat tempered expectations and feared Rome would be too touristy and hectic, and so only had 2 nights in town. However, we were pleasantly surprised.

Rome is an incredible city. The tourist sights are obviously a must-do, but we had what was probably my favorite night of the trip once we got outside the sights.

Only found one #italianIPA today and didn't get a good shot, so here is one at the Roman Forum. Pretty incredible stuff here, amount of history is unreal #Rome #Roma #travel #Italy #craftbeer #ipa

The first thing we did after our five hour train ride from the coast and checking in the hotel was eat and grab a drink. Options were abound, and Rome clearly had some of the more diverse food options available. We were pleasantly surprised to find many food options we would expect to find in San Francisco. After traveling for two weeks and eating rich and heavy food constantly, we were craving something on the healthier side, and Rome had plenty of options.  We strolled through the Monti neighborhood along Via Urbana and were able to get a decent beer and healthy lunch at a place I now cannot remember the name of or find, doh!

We then proceeding to try and squeeze in all the main attractions we could. Over the next 36 hours, we visited The Roman Forum and surrounding sights, did a guided nighttime tour of the Colosseum, visited the Vatican City and toured St. Peter’s Basilica and up to the top of the duomo (unfortunately the Vatican museums and Sistine Chapel were closed), saw the Spanish steps and Trevi Fountain, went inside the Pantheon, and popped our heads in countless other churches (many of which would have been incredible on their own if you were not comparing to the basilica or duomos we had already seen)

In order of preference, of the “major sights,” my favorites were as follow:

1. Night tour of the Colosseum.  It felt like we had the whole place to ourselves.  We started with a guided tour around the outside of Palantine and Capitole Hills and the Forum, then around and inside the  Colosseum.  We were in a group of about 20, and there were only a few groups allowed in. The night tour was more expensive, and did not include a tour of the Forum, but you can do that separately. The night tour was relaxed and had so many less people. Moreover, you got to see the “underworld” of the Colosseum where the gladiators and animals stayed until they fought. This was only available in the night tour and very cool. 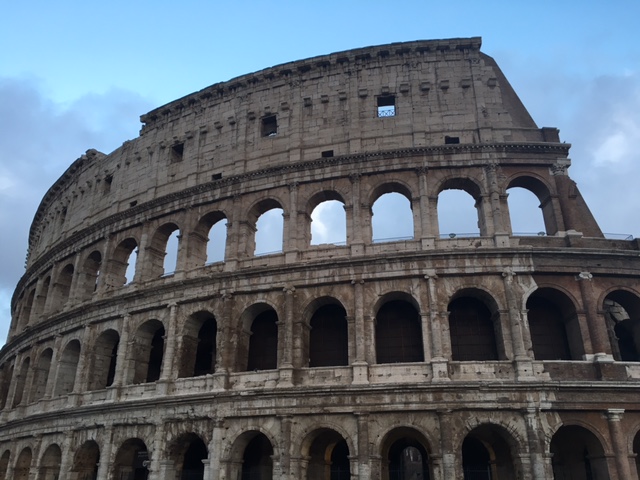 2. St. Peter’s Basilica. We went to Vatican City on a Sunday so the museum and Sistine Chapel were closed. However, still worth heading over just for the basilica. It is insanely huge and stunning. The artwork and sculptures inside are amazing, but the sheer size of the place is the star of the show. We also went up to the top of the duomo, which was…an experience. We chose to walk (elevator was an extra few Euros but I was ok working off the beers and pasta) but in either event, you had to walk up the stairs of the dome itself. This was intense. The stairs are steep and circle around he dome. For a 6’5″ guy this was brutal. I was hunched over the whole way. Worse, it was hot and claustrophobic. People were freaking out, and the would try to walk against traffic to leave. It was a disaster, as turning around made it ten times worse for everyone. However, when (if) you made it up top, wow.

Scaling the top of the Cupola at St. Peter's Basilica is not for the faint of heart. Need an IPA after that. #Italy #Roma #rome #travel #smallpeople #wayup

3. Pantheon. Most people think of the Pantheon and see the exterior.  I imagined it to be out on its own somewhere and you looked at the outside and moved on. I was way off. The Pantheon is in the middle of a walkable and vibrant neighborhood and piazza.  The interior is amazing, with an open ceiling.  Totally surprised by how much I liked it (and it is free!).

4.  Other worthwhile stops:  Trevi Fountain and the Roman Forum were my other two favorite spots.  The Forum is fascinating.  We did not have a tour guide for this (since we did the night tour of the Colosseum, it did not include the guided tour of the Forum).  Trevi Fountain was beautiful and the highlight of a great walk we took between several sights. (note, the Spanish Steps were being worked on when we were there, so it was underwhelming). 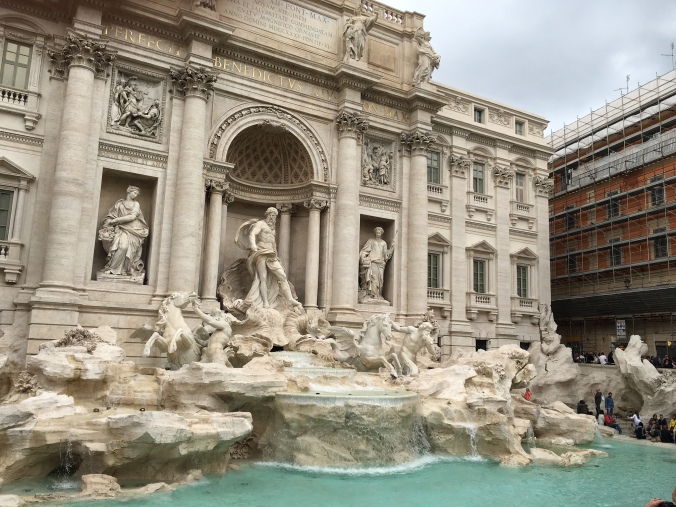 Somehow, even after walking and sightseeing all day, we made it out both nights in Rome.  Our second night was much more memorable.

The first night saw us cruise around the Via Urbana area.  There were a ton of people partying in the streets and full bars and restaurants.  It was fun, but nothing special.

The next night, we went out in the Trastevere.  Trastevere was about a 15 minute ride from our hotel, away from the typical tourist sights (this was the first time we had taken a cab all trip, mostly because it was raining!).  As soon as we got out of the car, we knew it was our kind of area.

Trastevere contained many small, winding streets filled with bars and restaurants.  We wanted to stop at Ma Cha Siete Venuti a Fà, a well regarded craft beer bar.  Unfortunately, it was packed and as it was pouring, drinking a beer was not a desirable option.  So, we proceeded to Bir & Fud, which was the best beer bar we visited in Italy.

Bir & Fud had pizzas and great homemade chips.  More importantly, they had at least 30 beers on tap, including several IPAs.  It was pretty slammed, but we scored a couple seats at the bar.  Bartenders were attentive and friendly, and the beers were the best beers I had on our trip.  It was a fantastic find on our last night.

After Bir y Fud, we headed to dinner at Grazia & Graziella. Despite the pouring rain, it was packed.  We sat outside under cover and stayed dry.  The servers were having a great time, singing and clearly ready to party.  We loved it.  The food was also phenomenal.  We had a killer salad with buffalo mozzarella, delicious pasta, and this crispy artichoke which was unlike any other fried artichoke I have ever had.  I can’t really describe it, you will just need to go taste it.

Overall, the Trastevere neighborhood was my favorite neighborhood of all the places we visited.  This came as a surprise, as I had heard very mixed reviews for Rome.

Overall, our trip to Italy was the best trip we have ever been on.  The sights were incredible, the food was amazing, the wine was great (and SO CHEAP), and the people were amazingly hospitable.  It is evident beer is becoming more popular, and I would guess by my next trip, there will be even more options.  I am looking forward to that!

One thought on “Craft Brew in Italy – Part 3”