I love good beer. I also love enjoying good beer with my wife and dog. I therefore really love doing both together. Unfortunately, that is not always possible (unless done at home). Hence, the following series.

I cannot profess to know every single dog friendly brewery in the state, but I do believe I have a pretty good grip of the best ones in a few different areas, namely SF, the Bay Area and north, and the Central Coast. This series will pass along my knowledge on this ever so important topic.

Some of the prior articles in these series are here:

This post is a continuation of a prior post, linked here: Dog Friendly Brewery Series – Tahoe and Auburn

The first blog dealt with North Lake Tahoe.  This post touches on the breweries in the South Lake Tahoe area.

Stateline Brewery, is, as expected, right near Stateline.  Technically it is in California in Heavenly Village.  The brewery itself is basically in a huge basement.  It is a large space that can get pretty busy for dinner.  However, the best part of the brewery is probably the outside seating right on Highway 50.

The outdoor sitting was plentiful when we were there (Memorial Day Weekend at about 4 in the afternoon).  There were good happy hour deals, even on Saturday, for drink and apps.  Unfortunately, there is no lake view, but there is solid people watching.

I had an Acclimator IPA, which was better than I remembered their beers being.  They also had a variety of beers from other breweries, which was nice to have as they only had a few of their own beers on tap when we were there.

The service when we sat outside was solid (when we went for dinner it was pretty slammed and the service was not as great). 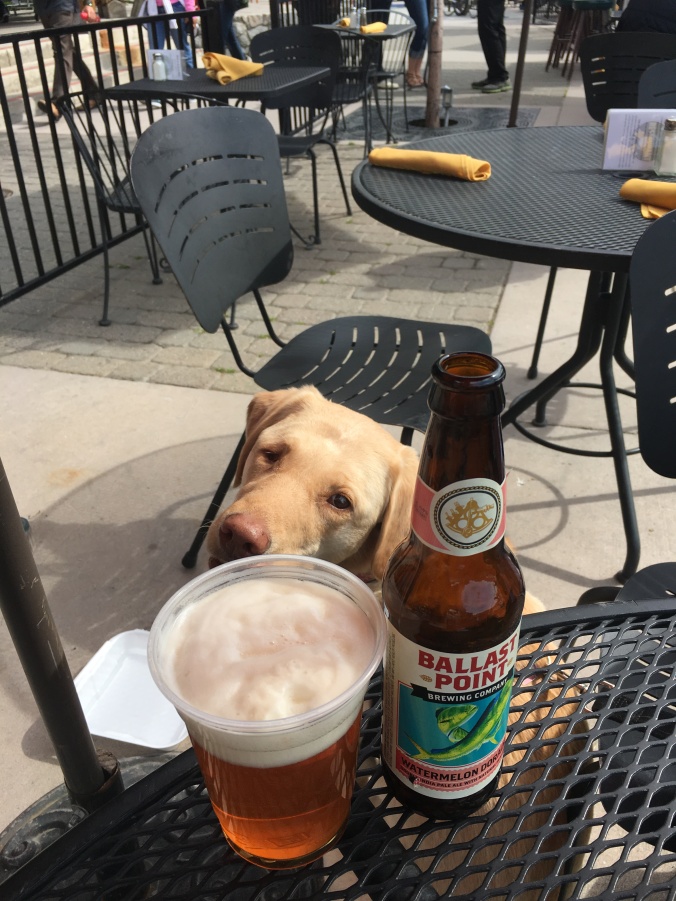 The Brewery at Lake Tahoe is not as conveniently located as Stateline Brewery if you are staying in the more touristy area.  The Brewery is a little over a mile away from Stateline on Lake Tahoe Blvd on the California side.

The Brewery has a decent sized dog friendly area, albeit with no real views and not as great of people watching as you get at Stateline.

Beers are good, nothing too exciting but drinkable.

I have not eaten here yet, but plan to do so next trip up and will give an update.

Although clearly not a brewery, MacDuffs has one of the better beer selections in Tahoe and a large, comfortable dog friendly patio with a peak of a lake view.  The food is also better than average pub food, with great (and huge) burgers and fish and chips.

It is a must hit when in Tahoe, and the owner, as evidenced by their glasses, is a dog lover (that is actually his dog on the glass).